Scandi crime writer Jo Nesbo was a top flight footballer before falling victim to a cruciate injury. He then was a lyricist and musician with Norwegian pop/ rock band Di Derre. While his band mates were on the tour bus, he was flying back to Oslo daily to do the day job- stockbroker. Ridiculous levels of over achievement, before he became a novelist.

He got into writing crime fiction because he had five weeks to write something and reckoned crime would be good- it needed a start, a middle and an end, and surely he could do that. While touring Australia with the band.

At this stage the audience were rocking with laughter, or jealous rage.

Jo Nesbo faced the biggest audience of his book launch tour at the Ulster Hall over the weekend. He was impressed equally by the fact that Dickens and Led Zeppelin had been on that stage before him. He’d have been ecstatic if they’d been able to find a note of George Best having been there too.

From a distance the shaved head, black t shirt and jeans put me in mind of TV doctor/ detective Gregory House, and of course the other funny guy/ sportsman/ musician/ writer/actor chap, Hugh Laurie. This is never a bad thing.

Nesbo spoke of revealing only 10% of the story in his novels, trusting the reader to do the work. Also, he has to trust to the translator- accepting that some of the nuance will get misplaced in translation. What I hadn’t considered was how important an English translation is, as that forms the basis of other versions- e.g. it is easier to find a translator to work from English to Korean than from Norwegian to Korean.

He spoke mostly of his Harry Hole series of novels, but also stand alone work, film, and children’s books.

We heard of how a childhood experience eating apples off the tree (unpicked- the apples still on the tree, growing) inspired a particularly horrible murder in Phantom. I haven’t yet read that book, but the image of Jo up his granny’s tree with an apple stuck in his mouth will stay with me.

“My stories are about moral dilemmas, about choices.”

“Everybody wants a happy ending, but really, we want to know will he do the right thing. Will he save his eternal soul?”

I’ve read several of the Harry Hole series. The rest may have found their way on to my Kindle within minutes of me arriving home…

“I am the world’s greatest living crime writer. Jo Nesbø is a man who is snapping at my heels like a rabid pitbull poised to take over my mantle when I dramatically pre-decease him”
–James Ellroy

Consider that the latter may have been the result of some unintentional overindulgence or other.

Decide that there’s only one cure for whatever’s ailing you.

Walk down the hill, across the bridge. Head through the park and pass all the happy smiling graduates and families. (Silver shoes are a thing this year.)

Retreat to a place of discovery.

Be ruthless in your selection, but not cruel. Pick 3. Only a philistine would restrict herself to 1. 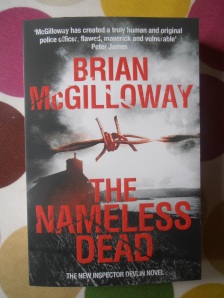 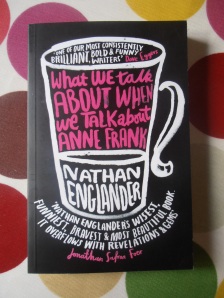 Skip home, restored and ready to face the world.

“I’m about to start a new book”

“Hmm” (translated as “Why are you telling me this?”)

“It’s by- listen, you do know this name- John Gordon Sinclair.”

So before I got to start reading we shared a few moments talking about Sinclair, the film Gregory’s Girl and oh, yes, Clare Grogan. A clip from the film was featured in the Olympics opening ceremony, and we had “aaahed” then also.

Who of my age from the British Isles doesn’t have a soft spot for John Gordon Sinclair? It’s as if we think he is actually gormless Gregory, and we want to will him on to good things. Yes, it seems I paid money to cheer on a fictional character from 1981.

It’s a crime novel. That’s good; I read lots of crime. I hope it’s not too bad.

Oh. Oh dear. It opens in Newry. It’s going to be about “The Troubles”. That’s not promising. It could be patronising/ glorifying violence or just 50 shades of wrong.

Apart from the necessities of life- sleeping, eating and watching Borgen– I didn’t put the book down. It was I who was wrong. There are a few clunky moments, but I was hooked.

It has assassins, spies, American gangsters, pretty girls, humour, cartoon violence, IRA men, underground warrens, army and policemen. Not for the first time, I considered what a gift the real life Freddie Scappaticci has been to fiction. Brotherhood and forgiveness- there’s a Butch and Sundance vibe going on. It has some of the most gross violence I’ve read. That was a surprise. Psychopathic violence to chill your bones. Keep me awake sort of violence.

Sinclair is working on a sort of follow up, and I’m hoping that some of the women (grieving mother, stoic widow, reluctantly caught up in the madness local girl, quite enjoying being caught up in the madness American barmaid), or Niamh, the child, get starring roles in that. Seventy Times Seven is about the legacy of violence in a society and a family; I’m curious about how Niamh turns out.

I’ll read it, without the Gregory background, without worrying about any galmourising of our patheic history. I’ll read it because Seventy Times Seven was a powerful read.

People! We know this guy! Paul A. Waters (I don’t know, but I’m thinking Anthony or Aloysius- feel free to add suggestions below) is our bloggy buddy Blackwatertown. I enjoy his writing and his company, and am not so secretly chuffed that he referred to me as a ‘health campaigner’ on twitter. ‘Health campaigner’ sounds more impressive than ‘mouthy lay-about’, don’t you think?

The Obituarist is full of derring- do, tall tales and an underlying tension. Straight backed army chaps with twirly moustaches, double barrelled surnames and stiff upper lips contrast with the up and coming journalist. There’s drink, and its effects.  There’s jealously, a friendship of sorts, and the wondering- who is going to pull a fast one? It’s crime, black humour, and old fashioned good fun. Conveniently for those of us with a Kindle, it can now be downloaded from amazon and other ebook retailers.