I’ve been reading a lot. The usual stuff- crime fiction alternating with women finding themselves and love (the tall/ dark/ handsome or mean/moody types prevail) in the countryside, remote island, or bookshop. There’s always a smattering of worthy books, because there’s only so much I can read about fluffy or victimised women, and I even branched into non fiction.

Jan Carson’s The Fire Starters is magical realism, Belfast style, and recently won the EU prize for literature. Read all of Jan’s work, you will enjoy it.

Emilie Pine (Notes to Self) and Sinead Gleeson (Constellations) have produced essays and memoir, both deeply personal, honest and moving. I read each in short bursts, pausing to deal with the ‘oomph’, the force of truth. Each deal with health issues. Others deal try to heal the healthcare system, and some of those are interviewed by David Gilbert in The Patient Revolution. The effort involved in working with the system to drive improvements, and the cost of so doing is enormous. This is something I know and recognise even from my limited involvement in similar types of activity.

My new volunteering, as a Boardroom Apprentice, brings its own challenges. Learning days, attachment to the board of a public body- including all relevant training and meetings, a group task, clothes that aren’t pyjamas, the whole grown up thing. Unexpectedly, none of those are the problem for me. Even more unexpectedly, my problem is the reading.

How can that be?

Included in the course materials are documents on the relationship between government departments and non-departmental public bodies, codes of conduct, rules of governance and managing money. The language is English, but not as I know it. It’s a particular form of the written word known as civil service speak/ Mandarin. It’s used by civil servants to communicate with each other, keeping formalities and rules to the forefront. It’s not written for the public to read and understand. There are attempts to improve the clarity of such things for us mere mortals, but that’s of limited use to me, struggling through a 10 year old paper on money.

Some of you know and understand these things. Practise will mean that I learn to read a sentence and move on to the next one, without needing five attempts and a dictionary. I’ll figure out what I need to know and what I just need to know exists. I may never read the 1932 Concordat (I haven’t found annex 2.1 yet) but I probably should know the legal powers my organisation has to actually do its work.

For the first time, I’ve been wondering if I should have tried law. Surely that would have trained my mind to read gobbledygook? My brain fog and difficulties with concentration mean that I could do with all the help. But since I don’t have a job, I do have time. I’ll be fluent soon, and if not, there are plenty of lovelorn 30 somethings in picturesque book shops or cafes to entertain me.

Oh, how I used to hate September. It was full of ‘fresh starts’ & ‘new beginnings’, while I was still in bed, going nowhere, doing nothing. Especially nothing new. Every September was a reminder that I wasn’t getting better.

I’m still not getting better. I had two ‘look at me, nearly normal’ days last week, followed by the inevitable ‘oops not enough energy to sit up’ days.

But it seems I’m not angry any more. Huh. I don’t know when that happened. It means I can just get on with getting on. There are things I’ll never get round to doing, but I’m not missing out on that much.

September still brings its changes. Girl 1 is going to university. She’s going to be having adventures I know not of, meeting loads of new people, and having fun. Studying, too. She won’t be far away so may still be subject to random hugging.

Girl 2 will be going to school on her own, rediscovering the bus in the process. Motivation to learn to drive, right there. Spurs Fan (a primary school teacher) has a new bunch of little folk to annoy for two years. They will soon know more than they ever need to about Tottenham Hotspur FC. That will stick in their heads longer than some of the curriculum.

I’ve had a break from all the volunteering. I’d thought I would do events, but one day of that cued me of the notion. Fun, worthwhile, enjoyable, but beyond my capabilities.

I’m going to have a new adventure of my own, as part of the Boardroom Apprentice https://strictlyboardroom.com/apprentice/ programme. I may be the eldest student, or the only one without a job, but I have a new notebook, and am keen to learn. What else do I need? 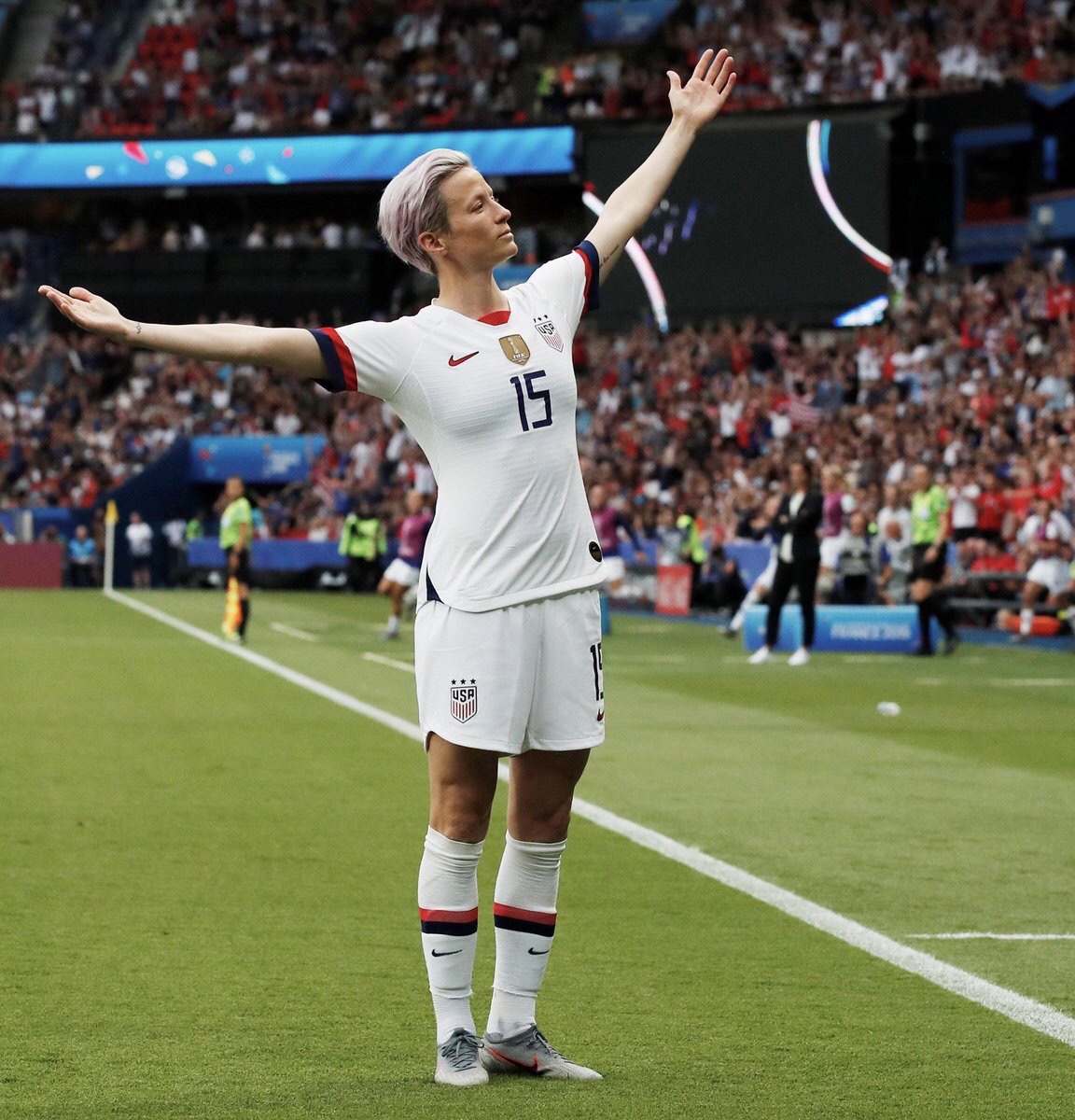 Bring it on, September.

Last April I went to an event with George Mitchell, Tony Blair, Bertie Aherne, Bronagh Hinds, Seamus Mallon & others to mark 20 years since the signing of the Belfast/ Good Friday agreement. (I went looking for the blog post on it & discovered that I hadn’t written one, dammit. I’d forgotten how useful blogging is for capturing moments that would otherwise be lost.)

It was a reminder of the work it takes to build a foundation for peace. Nothing just happens- it takes commitment, time to listen & a determination to build trust and consensus. It’s not a job with regular hours, or annual leave.

As the peacemakers spoke, it was clear that our current generation of politicians have different priorities. Seamus Mallon was wonderfully scathing, but no I can’t give you an example because I didn’t write it down…

This year there was nothing good about the Friday before Easter. I woke up to the news that Lyra McKee had been killed by rioters in Derry. When I gathered myself, I found Girl2 watching Derry Girls- the episode finishing with Clinton’s Derry speech . The confluence had me in tears. The hope for the future we had was embodied in Lyra McKee. 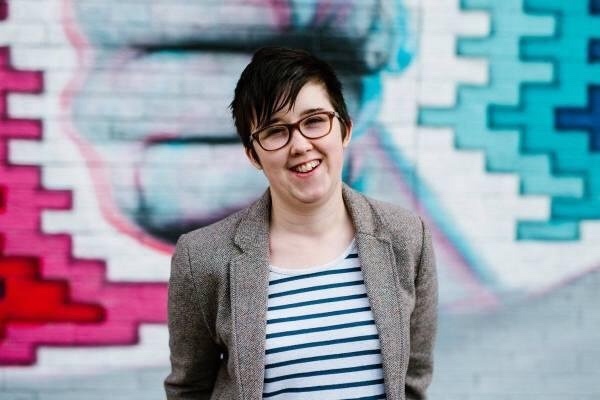 Thousands of people were killed in “the troubles”. Too many have been killed during “the peace”. Ms McKee was a force of nature, a talented investigative journalist doing her job. I knew her only from Twitter, we had friends in common. I admired her work, her humour, how she knew everybody. There have been many stories of her generosity, curiosity and warmth.

But what’s different about Lyra McKee’s life and death has been the variety of people she touched. She was a child of our peace, someone who should never have known our violence, much less be killed by it. She was a powerful advocate. She embraced social media. She’d found her love and moved to be with her. She was fearless in her journalism & had a book ready for publication. For young people, for Belfast, for Derry, for writers, for women, for the curious, for LGBTIQ, for politically interested, for the lost, for so many people, Lyra was ‘one of us’.

Her murderers called her death a ‘tragic accident’ & said their volunteers would be more careful in future.

The reaction to her murder has been incredible. Her friends used paint to mark red, as bloodied, hands over the building used by the dissident republican group. Such disregard for the big boys. Such courage. 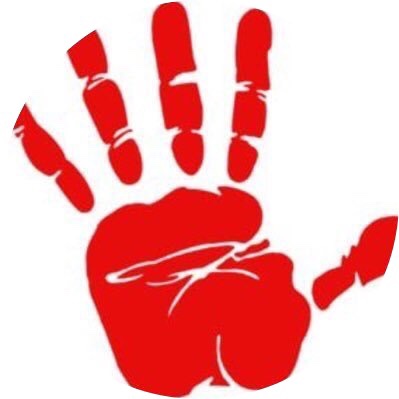 The funeral was shown live on two television stations. The Prime Ministers of UK and Ireland, the Irish President & a representative of the Queen attended alongside family, friends, colleagues & local politicians. From a Catholic background, Lyra was buried from the Church of Ireland cathedral, with a service conducted by clergy from both denominations. Lyra brought people together.

Referencing the local political stalemate (we’ve had no government since 2017) and the politicians sitting together in the front of the congregation, the priest wondered, “Why in God’s name does it take the death of a 29 year old woman with her whole life in front of her to get us to this point?” There is hope that this will mark a changing point, and cynicism that we’ve had potential changing points before, but our politicians dig deeper trenches.

Politicians won’t change until we tell them too. In May, we have 2 elections- for local councillors and for Members of the European Parliament. Our so called leaders will take their cues from those results.

Months ago, Kileen suggested a night out. Of course I agreed. We arranged the eating part & connected with the others. We were going to a talk by someone I was only just aware of – a floppy haired tv explorer chap. I’d seen a programme or two, but he’s been doing it for years and I’m not an explorer type of gal.

I got home hours later than expected, and am now a fan. Bloggy buddies, Simon Reeve is your man. He was a troubled teen, leaving school without qualifications and with mental health problems. When he admitted to being overwhelmed by life, a kind woman at the dole office told him to just take things step by step, and he did. To the gate, to the corner shop, to the train station, to Scotland, to Glencoe, to that rock, up another bit. Somehow, woefully unprepared, he avoided the need to be rescued & celebrated enormous physical achievement. He even made it home again in one piece. Prior to that, his experience of exploring had been in Granny’s car, directing her to go left, right or straight on, regularly ending up by the biscuit factory.

Eventually, Simon got a job sorting the post for the Sunday Times. When he gathered himself enough to look round the workplace beyond the post room, he got involved in investigations. By 19, he was leading a team. By 20 he had the bit between his teeth and left to research his own book, The New Jackals. That was published in 1998, was quietly well received, and vanished.

In 2000, he published One Day in September, about the massacre at the Munich Olympics in 1972. The accompanying documentary of the same name won an Oscar.

When the attacks happened on September 11, 2001, Reeve’s phone started to ring before the second tower was hit; it didn’t stop ringing for a year and a half. All that research for The New Jackals had made him the author of the only work on Bin Laden & al Qaeda, and in demand.

By this stage I was entertained, moved and agog. There is more to smiley tv guy than I could have imagined. Isn’t that the way? 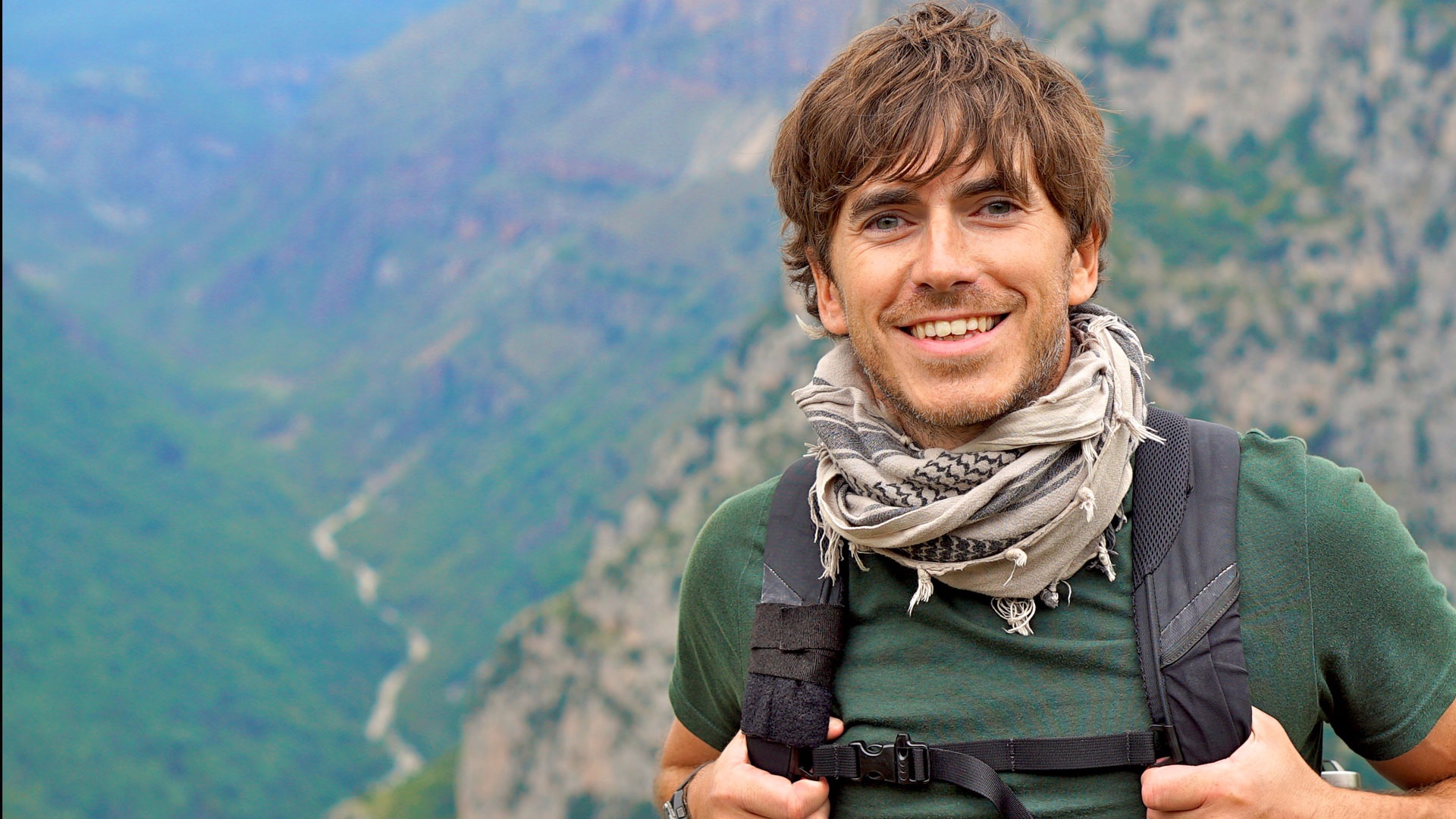 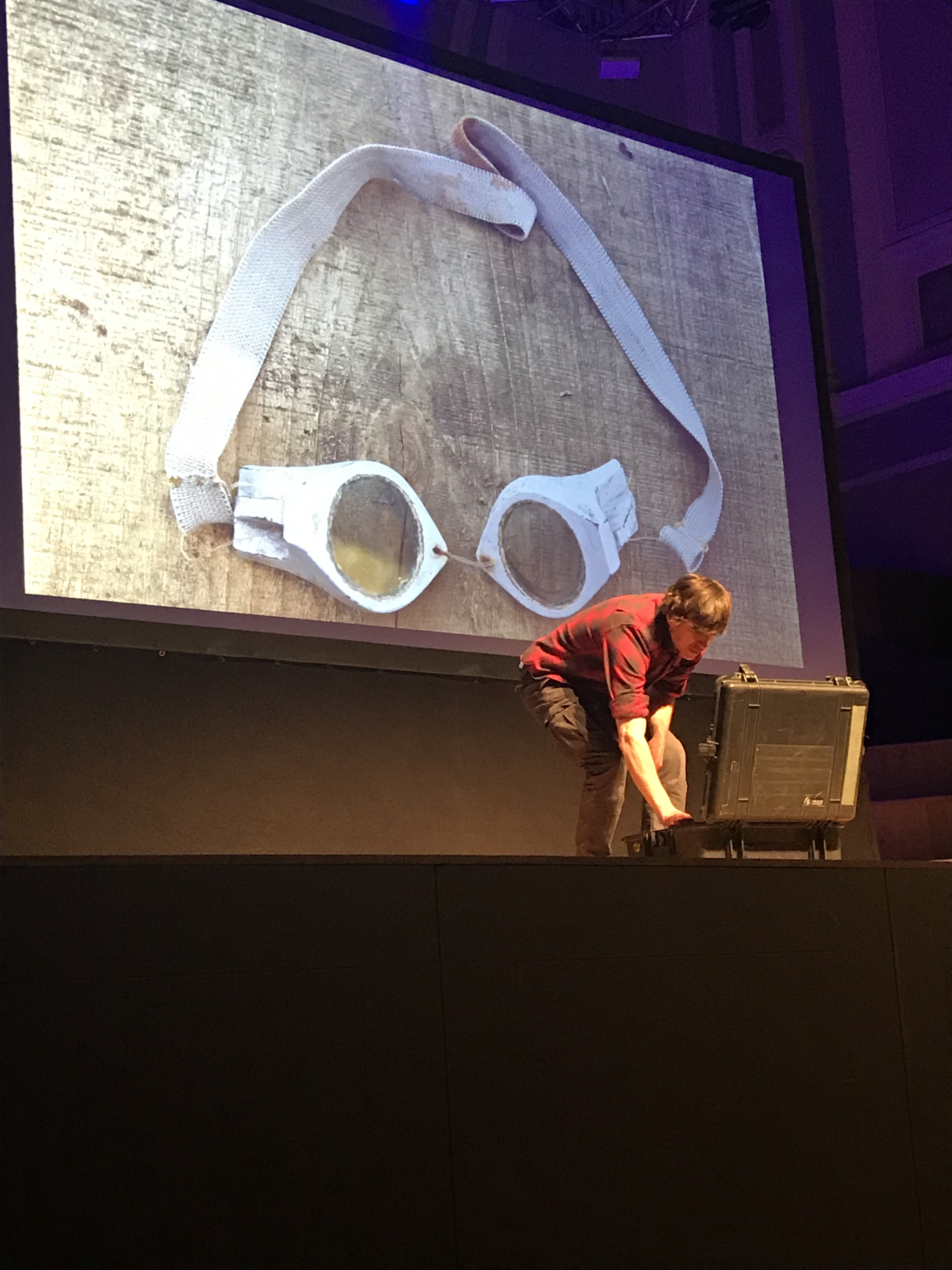 Nearly half way through the show, and he moved to chat about the programmes made for the BBC. There are many, many series, starting with Meet the Stans and Places That Don’t Exist, moving around the equator and the tropics, and currently working on the Americas. I have much to catch up on.

Tales of toilets (and pigs), being arrested by the KGB and starting down the barrel of a rocket launcher. Armoured undies, wooden swimming goggles & a huge bolt (thrown locally, Belfast is kind to visitors) were all pulled out from travel kits.

The message wasn’t about tall tales or beautiful views; instead, you haven’t journeyed unless you’ve met people. Talk to people, eat the food, experience the light and shade of the world. Push yourself to experience a wee bit more. Look for adventure close to home. Meet people.

When questioned about when or where he’d like to have lived, Reeve was also clear that he’s happy with the here and now, the opportunities to travel, and ‘my lad’.

Grounded and humble, curious, open and grateful, Simon Reeve is worth checking out. I have much to explore! 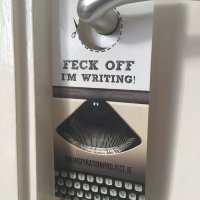 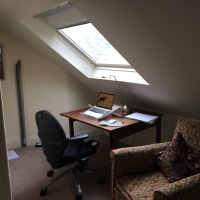 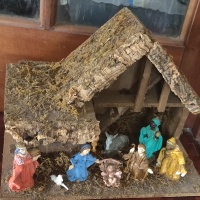 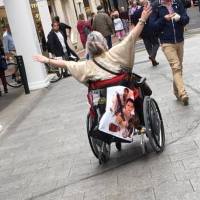 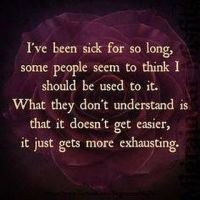 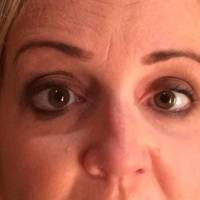 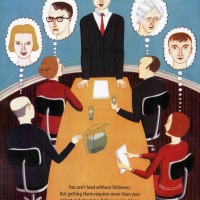 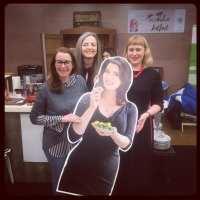 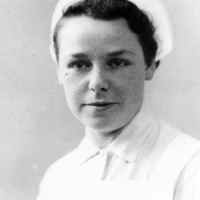